Firstly what is a Hydrophilic Wax!?

Hydrophilic waxes are the opposite of their Hydrophobic counterparts which deter water.

Lets start at the beginning: Most waxes are naturally hydrophobic, as skiing was a sport first invented for snow. As skis and boards pick up speed they gather more friction, this friction warms the base, ultimately melting the snow underfoot, creating a thin film of water between the base of the ski and the snow. So a ski or snowboard waxed with a hydrophobic wax is able to accelerate on snow as the water particles whizz away at high speed.

Learn the science with BioNerdy!

So where does Hydrophilic wax come into it?

Hydrophilic waxes do the opposite, they attract water. Can you think of an environment where the friction and heat build up under your skis may be unwanted? The answer - The Dryslope. Dendix, Snowflex, Nevaplast or any sort of 'plastic' slope can harm your skis. When your skis create friction against snow, it melts to water. When your skis create friction on a dry slope, unfortunately it's plastic versus plastic and your skis can overheat and 'burn'. You'll be able to smell the plastic melting (not healthy!) and your bases will be dried out, leaving them more susceptible to burning again in future, creating more drag, slowing the skier or snowboarder.

How do I stop my skis from burning?

As great as a layer of wax between your bases and the plastic is, it often doesn't last a whole training session. Plus, if the wax is hydrophobic, it's repelling water from the sprinkler system. Get yourself a hard wearing Dryslope Wax and finish off with a Hydrophilic wax that actually attracts water! It seems obvious but the majority of wax manufacturers don't produce hydrophilic waxes because their waxes are made for snow.

DataWax do - We've specifically created our own Hydrophilic Range for Dry-mat called Hydrazorb, team this with with our specific Artificial hard wax, Polar X as a base layer and say good bye to burning bases and hello speed! 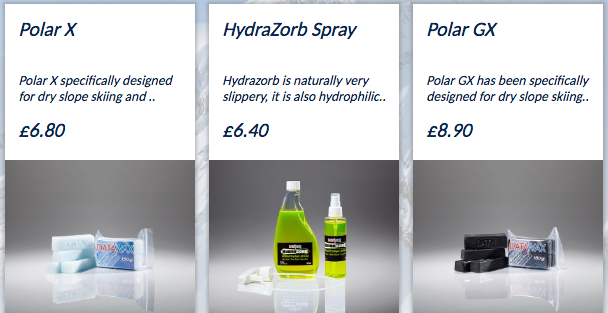