I started doing competitive snowboarding when I went to uni (Nottingham Trent) in 2006, this ranged from freestyle to slalom and the occasional boarder cross. I had done competitions in other sports such as athletics before so as soon as I reached the ability with my board to compete I was very keen to try.

I first tried speed boarding back in 2013, I had seen that Jamie Barrow had the British record and I knew I had beaten him before at events such as BUISC in the relay, so I was just had to see if I could beat him on a speed slope. The hardest part for this was the preparation, I spoke to some speed skiiers and some speed snowboarders who compete in a world league that ran back in the early 2000's. I found that all of the speed slopes that were interested in letting me make an attempt were too short and that...

"Even with perfect conditions I was only ever going to be close and unlikely to break the 160km/ph barrier I dreamed of."

With Les Arcs deemed too dangerous and closed and Verbier slope slipping in a landslide it only left VARS run by Phillipe Billy, a French speed skiing enthusiast who isn't overly keen on snowboarders and those new to his piste. During the trip I met and trained with Joost Vandendries a Belgium skiier who was just getting back into speed skiing, then a few months ago he mentioned he was going to be attempting the indoor record, I let him know I was interested however he already had a snowboarder taking up one of the spaces. Fortunately for me on Friday 20th Joost messaged me saying they had pulled out. 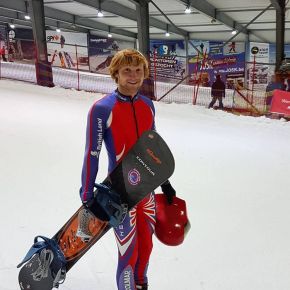 We caught a ferry late Sunday ready for the training rides on the Monday, Joost, Maxime (mono skiier), Katrien Aerts (female skiing switch), Mathieu Verlinden (male skiing switch). We had around 1/3rd of the piste fenced off with the official guys from the FIS setting up the timing gates towards the bottom of the slope, even though it was pisted the slope with a little messy and the two rollers towards the top made it tricky to get into an aerodynamic position.

My first run in standard boarding gear had me reach just 62km/h. At this point my fears on the size of the slope seemed to be coming true, with Joost reaching 78km/h it wasn't looking good for either of us, the others were just setting records so there was a little less pressure on them. I pushed myself harder, throughout the session getting a couple of kilometres more each time and the same again as I cat suited up, at this point I was wearing my Ruroc Helmet and on my Windlip custom board. Finally by the end of my runs I had reached 69.9km/h so I knew that the next day I could do it. The feeling of going from fairly dejected initially, disappointed with my speed to very positive and excited about the fact that I could have a world record the next day, was quite a thing, I sent one message home just saying "I think I can actually do this".

Joost and I spent hours that night then waxing up, even more so than when I had the day before my speed run and he showed me many little tricks to get an even better finish, we started with cleaning, then a graphite layer, a base layer, then Magma High Fluoro Race Wax to top it off.

My warm up runs were back on the park board, so I could be 100% confident before it began, they had iced up the top of the slope to try and help Joost reach the 105kph that he was needing however this made it very tricky on my board and stopped me tucking so I was worried I was going to come up slower than the day before and the warm up runs on the Nitro board were proving this.
We were allowed 4 runs on the day and then the piste would be changed back for slalom training, I strapped in to my Burton Cartel Bindings on my perfectly waxed Windlip board and knew that with enough commitment I might just make, I donned the aero helmet Joost had lent me and threw myself down the slope. Reaching forward as much as I could I passed the last gate and edged hard to stop before the row of journalists at the bottom,

"looking up I saw the speed come up on the board, 69.9kph, I had reached my goal on the first run!"

Now it was time to see how much more I could gain, the next run I hit 71 and then 72, with the wax now wearing off I struggle to increase on that with my final run dropping back to 71. I had been trying to beat Maxime as his outdoor record is slightly more than mine so I knew it could be close, I had equalled him when I had hit 72, but then he smashed it again with a 74. Even with this minor upset I was elated, I had never dreamed of having a world record before and now in just 4 days I had gone from nothing to breaking one.